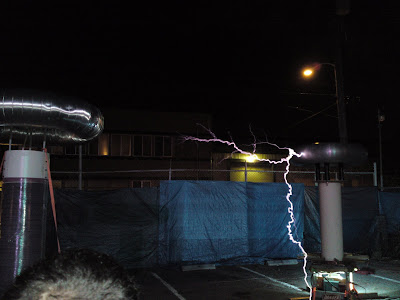 Last week Saturday I saw some crazy ass electric demonstration in Oakland involving the giant Tesla coils pictured above ... a light bulb was powered by electricity transmitted throught the air while sparks flew and didn't fail to mesmerize the watching crowd.

Inside the venue of the dorkbotSF 7 year anniversary party there were several other interesting contraptions being displayed and presented in talks. Alas I didn't get much of the performance involving a 1928 Hogan "medical" electrocution device due to large crowds, which was made up by the who is who of Bay Area robot dorks, occupying the better seats.

V. Vale had a table selling REsearch books; I left a few copies of theRoboexotica book with him (and my no-longer-needed extra battery & charger for the lost Lumix camera)