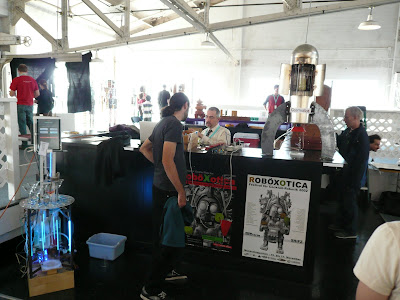 The bartenting competition's winners have just been awarded their medals. iLush (to left in the pic above) came out on top, followed by Fairy Juicer and Cosmobot. Stuart Ferguson's creation had already won Gold last year and winning against such tough competition can apparently be perhaps be attributed to the fact that it was the only bot this year that was able to serve more than one specific drink, since versatility was one of the judging criteria.

More on all the winners soon on this blog.