Barbot was a two night event at pariSoma showcasing around 10 tasteful creations concerning cocktails and robots, some of which mixed and served cocktails like the White Russian Hippie, one of which vaporized spirits for consumtion, and one of which (apparently) turned water to wine.

Having been de-assembled for air transport, the Hippie had limited funcionality to begin with - ice cubes had to be added manually throughout the first evening. Considering this handicap it held up pretty well, serving dozens of drinks to vegans (using soy milk) and non-vegans (regular cow milk). The White Russian Hippie, as the product of Roboexotica's 2009 cocktail-robotics workshop incorporates some of the core values at Roboexotica, like, quite importantly "Grace over Efficiency". So while patrons where waiting for their drinks to be assembled, they were entertained with delicate (and affordable) mechanics at play, as well as the adequate music for their choice of drink (Russian muzak for non-vegans and soft sitar sounds for the vegans).
All went well until the very end of the evening when the main elevator broke and smashed a sensor along the way. That meant a dys-functional Hippie on night two, and serious repairs during the next week.

At this point a big thank you needs to be shouted out to Ken Mochel, who brought his instruments and expertise to fix up the machine.

At Robogames, alas the pouring of real cocktails was limited to the crew party on day one after official closing time, so for three days the flawlessly working robot was manufacturing purely exemplary drinks with water for Vodka and chocolate milk for Kahlua. With ice. 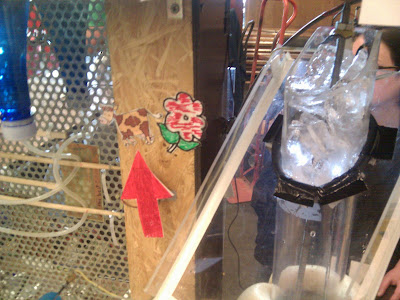 Sadly it has to mentioned the new venue for Robogames - San Mateo Fair Grounds instead of Fort Mason Center - does not provide as nice a flair for cocktail robots or more generally for art bots. Adding to that lack of atmosphere was the lower than remembered number of booths presenting or selling diverse projects and goods across the robo spectrum. The organizers may have concentrated on the battling bots a little too much this year, which would be somewhat excusable since a crew from Discovery Channel was there to shoot for a one hour special about just the fights, which will air end of May. (Disclaimer: This post's author considers the organizers, who are identical with Barbot's organizers, good friends. And enjoys the Robogames for what they are: still the largest international robot competition covering around 70 disciplines including bartending)

As for a medal for White Russian Hippie ... it came in as a close 4th, owing to the guidelines for the judges which reward robots that mix more than one kind of drink over a robot that makes just one (and maybe the Russian looks of the machine?).
Surprisingly Team WRH did still return with a silver medal from Robogames - for a light seeking BEAM robot that was a spontaneous entry.

Flickr sets: Barbot, Robogames
Posted by magnus at 6:07 AM

Always hard for me to understand a human robots... Even white russian hippie? In my country people don't believe it....
Cool! But the note's is interesting!

All year round, around the globe.

This is a Flickr badge showing public photos from shifzr. Make your own badge here.